Here is a character i painted last week when i was trying to get the whole black and white thing working for me. The character on the right was done by rocket 01 and the lovely birds by fauna. 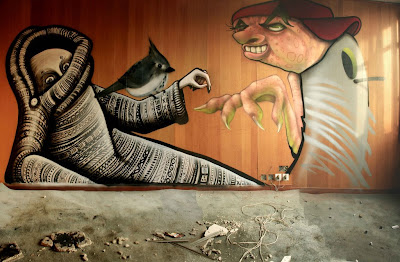 This is where i should start explaining my master plan for this summer. Basically almost every wall I paint this year will be a frame in an a4 colour book later this year. I'm weaving a load of simple organic story's and myths around the characters and then photoshopping the frames into place. It's going to be fun. I just want to add more narrative to the wall work and stop it getting stale. I'm also weaving about ten or so collaborations in there, but i'll go into that when it's a little more organised. The wall below was done with rocket01 and it's about how drastically out of control an organic tash can get. 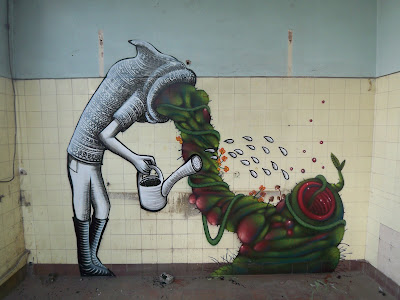 This isn't one of the frames, i just wanted to get fully up to speed painting this way. It's great just slapping up a character in white emulsion with a roller and then going at it with cans of black. Simple, cheap and should keep the look of the comic uniform. 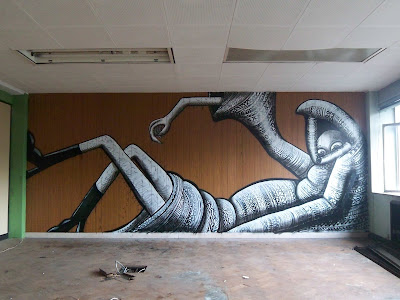 Here's one of the frames. Although i may do a few other versions without spears...i don't really like that. I'm painting the back of a bookshop (rare and racy) in the next few weeks that will be a part of this same story. 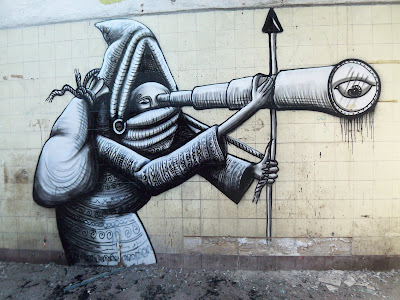 Thats that cleared up then...now i just have to paint twice as much every time i go out painting. I've put a few other angles on the website too.