I was hoping the new comic would be ready from the printers today but no, its still not ready.
I've got myself a new studio in a grotty part of town where i can get a bit more of my messy ideas done. I've been collecting large advertising posters from clubs, cinemas and shops over the past few weeks. I've been doing some quick sketchy hand sprayed paintings over them, cutting them out and then pasting them up. It's a nice alternative to a photocopy i think.
Here's a bad photo of one i pasted inside a hole in the tiles of a subway tunnel. 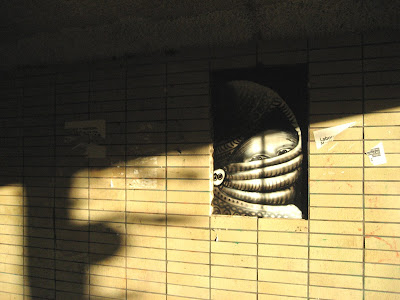